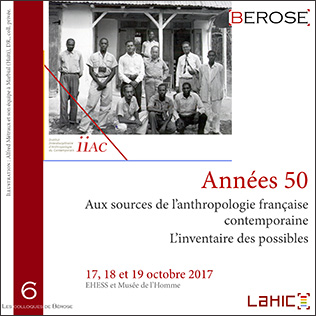 Five years after the end of the war, the period of institutionalization and consolidation of French ethnology, starting in 1925-1928, ended definitively with the retirement of Paul Rivet (replaced in January 1950 as the head of the Musée de l’Homme, not by an ethnologist but by a palaeontologist and physical anthropologist, H. V. Vallois), and the death of Marcel Mauss in February 1950. After the death of Lucien Lévy-Bruhl in March 1939, the other two founders of the Institute of Ethnology of the University of Paris – a locus of intellectual training crucial to the first generation of professional ethnologists – left their functions or this world. At the turn of the 1950s, the succession was undeniably assured, the heirs – direct and indirect – were numerous: several ethnologists (or sociologists, the border is sometimes porous) who will play a significant role in the anthropological field have returned or will return from the United States, Mexico, Brazil, or captivity including Claude Lévi-Strauss, Alfred Métraux, Jacques Soustelle, Roger Bastide, Louis Dumont, but also Georges Gurvitch (who, with Gabriel Le Bras and Henri Lévy-Bruhl, created in 1946 the Centre d’études sociologiques to which Bastide would be close), Georges Balandier, Jacques Berque, who hesitated to claim ethnology and preferred a sociological filiation, less suspect of confining distant societies on archaic or essentialist shores. Marcel Griaule held the chair of ethnology at the Sorbonne from its creation at the end of 1941; André Leroi-Gourhan, that of colonial ethnology at the University of Lyon from 1944 before succeeding Griaule at the latter’s death in 1956.

For the French anthropological field, the period that begins at the threshold of the 1950s is both promising and polyphonic – the game seems very open. It is impossible not to show a presentist look when we consider these years with hindsight: the major anthropology laboratories (the social anthropology laboratory of the Collège de France, the ethnology laboratory of Nanterre) were not founded; a series of regional or specialised study centres were created in metropolitan France and overseas; neither structuralism nor Marxism dominated theoretical debates; the great names in French anthropology had not yet been identified; the community of teachers and researchers was relatively small (about one hundred and sixty, according to Leroi-Gourhan), the Musée de l’Homme still exerted a certain centripetal force around which several institutions in mainland France and overseas were based; the first RCPs (cooperative research programmes) would not begin until around 1962. Gradually, with the recruitment of key personalities, the sixth section of the EPHE was gaining strength and asserted an anthropological depth never before seen.

By introducing necessarily selective criteria, the central ambition of this conference is to try to map the living forces in action, to identify certain important actors (established, emerging), to identify new objects of study, to evoke striking ethnographic fields, to observe the friction on disciplinary boundaries (with psychology, sociology, law, literature), the requests for expertise from UNESCO, the recomposition of the ethnology of France with the progressive exclusion of folklorists and the establishment of ethnographic practice and the circulation of ideas across borders. Important works, written by the rising generation of French ethnologists, were being published that would have a lasting impact on the field. It was very dynamic, with a great plurality of theoretical and ethnographic sensibilities; highly original voices were expressed. In addition, a very hectic period started with the beginning of colonial wars and decolonization.

The conference makes no (impossible) claims to be exhaustive, but we hope to sketch a sufficiently suggestive picture of this turning point in the 1950s to provide an interesting overview of the whole decade. We wish to be attentive to the great diversity of scientific and methodological ambitions carried on by anthropologists who would shape the next thirty years, without necessarily adopting a teleological perspective. There are failures, dead ends, promising attempts that would not go all the way: science was being done, in short. We share a strong desire to decompartmentalize cultural areas, to make Europeanists and “exoticists” anthropologists dialogue, to mix “pure”, institutional and scientific stories, thus allowing a reading at several levels of the period, trying to restore this dizzying inventory of the possibilities of a very rich decade, which was decisive for the current landscape of contemporary French anthropology.