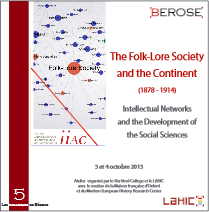 The Folk-Lore Society was founded in London in 1878 and was one of the first learned societies dedicated to the study of traditional European cultures. The renown of its members (Andrew Lang, Edward Tylor, John Rhys, James Frazer, Alfred Nutt, Walter Gregor...) was to ensure its influence in most European countries, especially in France where it was a model. But the interplay of influences worked both ways and some French researchers, such as Paul Sébillot in the 1880s, were themselves a source of inspiration for the Society. Co-organized by Hertford College and LAHIC, with the support of the Maison française d’Oxford and the Modern European History Research Centre, this workshop provided an opportunity to look at the Folk-Lore Society’s networks and their contribution to the dissemination of knowledge at the end of the 19th and at the beginning of the 20th century. It has helped to better understand the role of the Folk-Lore Society as an arbiter of conflicts in the European folklore community and why it has been able to take on this role. The exchanges confirmed the relevance of relational mapping as a place to gather and cross-reference participants’ inputs and made it possible to publish a series of files in the BEROSE encyclopaedia dedicated to the Folk-Lore Society and its members.