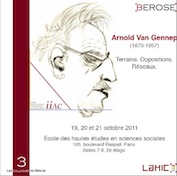 Taking advantage of the republication of several unpublished works and texts by Arnold Van Gennep over the past twenty years (Manuel de folklore français, Traité comparatif des nationalités, Le Folklore, En Algérie, articles published in the journal Mercure de France, etc.), the research done on his work and other scientific activity carried out by anthropologists and historians, the conference “Arnold Van Gennep (1873-1957): Terrains, oppositions, réseaux (Fields, Oppositions, Networks)” made it possible to break with the erroneous image of Van Gennep the “hermit” and restore all his complexity as a key personality in the French anthropological landscape of the first half of the 20th century. The conference highlighted, in a detailed and critical way, the field of opposition in which Arnold Van Gennep evolved, the different power relations – disciplinary, ideological, institutional, personal – that gave meaning to his scientific career.