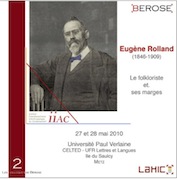 In the field of emerging folklore studies, at the crossroads of encyclopaedic publications that were still a reference and a source of inspiration for intellectual and scientific life at the turn of the 1880s and 1910s, Eugène Rolland (Metz 1846 - Paris 1909) was a prominent figure. The life and work of this fertile and original scientist (founder of the journal Mélusine, 1877), a researcher and discoverer of hidden cultural continents (the symbolic ecology of the popular flora and fauna of France and Europe), existed outside academic institutions and remained largely unknown. With his friend, Henri Gaidoz, professor of Celtic language and literature at the EPHE, he was to be one of the main representatives of a philological folklore that would find two of his most remarkable illustrations in his Faune populaire de la France – vulgar names, sayings, proverbs, legends, tales and superstitions and his Flore populaire de France ou Histoire naturelle des plantes in term of their relation with linguistics and folklore. The symposium devoted to Rolland highlighted the monumental work of a modest and discreet scientist. See the topical dossier in BEROSE Encyclopaedia.