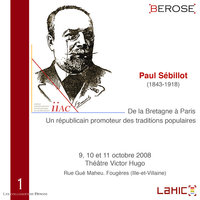 Paul Sébillot, who led a very active network of ethnographic data collectors for more than twenty years in the last quarter of the 19th century, is both an heir and an unknown precursor. Charismatic founder of the Society of Popular Traditions, he was heir to the impulse of ethnographic curiosity initiated at the beginning of the 19th century by the Celtic Academy and which would nourish a century of provincial erudition. It was in this breeding ground that Sébillot would establish his work of synthesis of a Folklore de France. It is a precursor in more ways than one, but above all because, while remaining close to physical anthropology and archaeologists – prehistorians in particular – he broke with a strictly philological vision of folklore and engaged it in the field of museography and the study of objects that would develop throughout the 20th century. This conference reattributed the entire scope to a character who had never before been studied and who was only sometimes remembered as a collector of folk tales or the compiler of folklore facts. It has allowed us to situate him in his time and his multiple facets: painter, republican politician, polygrapher and especially an influential member of a scholarly network which was characteristic of this period; the study of his biography helps us to better understand its contours.

The proceedings of this symposium were edited by Fañch Postic and published by CRBC in 2011: Un républicain promoteur des traditions populaires : Paul SÉBILLOT (1843-1918).